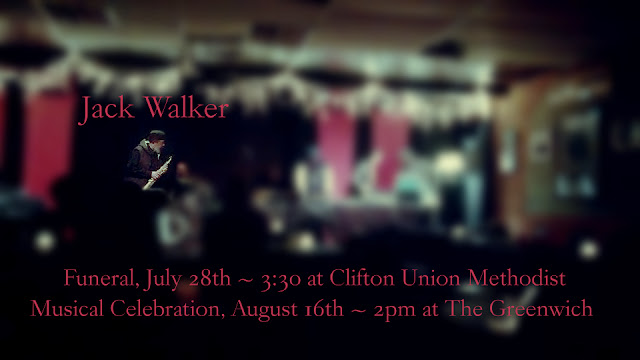 Jack Walker was an artist in every sense of the word. Interpreting and impacting concepts and aesthetics, he found art in the extraordinary and the mundane alike. He sketched, painted, collaged, sang, wrote poetry, played percussion and keyboards, but was best known for his inventive work as a saxophonist and flutist.

Jack performed with several groups over the course of his long rich music career including: Time & Space, The Healing System, The Last Boppers, SaSemblé, Made in Brazil, Terra Azul, Jazz Renaissance Band, and ISWHAT?!. He toured the United States and played concerts and festivals in several countries, including Finland, Austria, Croatia, Slovenia, Germany, Italy, Luxembourg, Canada and France. He shared the stage with incredible artists he respected such as: Antibalas, Archie Shepp, Arrested Development, Femi Kuti, Hamid Drake, Henry Grimes, KRS-One, Melvin Gibbs, Melvin Sparks, The Roots and many others. Once they experienced his calm greatness, the respect was mutual. 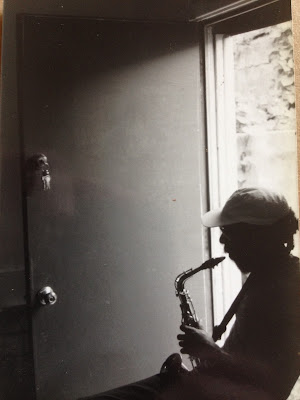 The greatest impact however, can be found on the hearts of people he touched with his rich baritone voice, his mystical flute lines, or his saxophone stories that were ancient to the future.

Here are some things that peers and admirers had to say about Jack Walker:

“I had the pleasure and honor of playing with Jack Walker just a little over a month ago. It was uncanny how well he and I were able to blend together without ever having met. He had a great soulful sound on the tenor and he was a warm person as well. I’m very sorry to hear about his passing, we've lost a great master.” ~ Graham Haynes (NYC)

“Upon seeing Jack (circa 1999), I must admit that one of the first things that struck me about him was how cool he looked, and the way he carried himself with a humble dignity.
I hadn’t heard him play yet, but in that moment I was experiencing a swirl of images…I felt as though I was looking at the quintessential musician’s musician, the artist’s artist.
Jack was just so cool ...Then I heard his deep elegant voice. All of this occurred, before I heard him play. While listening to ISWHAT’s set, everything that I had sensed and thought about Jack was confirmed, perhaps even more. I immediately felt I was with one of “Gate Keepers of the Great Tradition” as the late great saxophonist Yusef Lateef called it.” ~ Hamid Drake (Chicago)

“Jack Walker was the real deal, a jazz musician who passed along and continued his musical quest to the end. A hero in my book, and a wonderful musician.” ~ Claire Daly (NYC)

“Jack's eyes ...
Jack had the most mischievous, smiling eyes I have ever met ...
The sparkles he spread, warmed me up, and made me happy for the rest of the day.
Even if the world made him angry, he always had a benevolent eye on people.
His music and his paintings reflect beautifully his generous and soulful look at mankind.
I wish all people could see the world through his eyes ...
I love you Jack Walker” ~ Anne (Paris, France)

“Everything about Jack came off simultaneously humble and effortless which is difficult to pull off. I imagine it takes years to reach that point. Every one of the members of this band made me feel welcome and valued in the scene. And they did the same to everyone else. RIP Jack.” ~ Ill Poetic (Dayton, Cincinnati, Columbus, San Diego)

“In 2007 I accompanied ISWHAT?! on a tour in France.
I have memories of great gigs, some very good laughs and of meeting Jack Walker who made quite an impression on me.
I remember being eager to know of his past, his childhood, his family, his work, his involvement in music but I never dared to ask. Perhaps his comforting company was more impressive than my curiosity for a story that I'd imagined would make a great novel. The respect Jack inspired was not of intimidation. It was a sort of peace that one did not wish to disturb, rather that one wished to experience and share.

His presence was at the same time soft, strong and encompassing. I recollect being aware that it was pleasant to be at his side, feeling accepted in a very motherly and embracing way. The way he didn’t "judge" you was not a lack of concern or interest, nor was it absolute tolerance. It was a sort of kindness, benevolence.

He had the voice of a crooner but he didn't quite act like one. On stage did he wear something a little bit out of the ordinary, like his red beret, and he’d have the greatest of class. I learned from his reserved manners and his warm aura. And I'm not talking about self-development here. I'm talking intensity and experience — like in music.

I do still feel a bit embarrassed when I picture Jack at the back of that car I had rented and that was too small for the four of us … Especially because I had to sit in the front to find the way in or out of towns (Jack had to sit in the back) … but I never heard Jack complain.

I don't quite recall where we started but I do remember the last gig. It was In Mantes la Jolie, a far out Parisian suburb with a reputation for riots and isolation. The kids there could not understand why such good musicians would come to play for them. We don’t deserve you, they kept repeating.”
~ Fabienne Audeoud (Paris, France)

“A lifetime of music and artistic expression … There is no voice like Jack Walker’s and that voice has fallen silent now, but his vision and his work remain. Jack spoke with the notes of his horns and we listened to his soul float effortlessly from his lungs … play Jack play, play your horn.” ~ Brian Greer (Lincoln Heights) 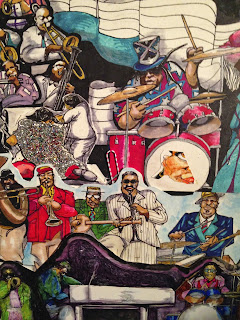 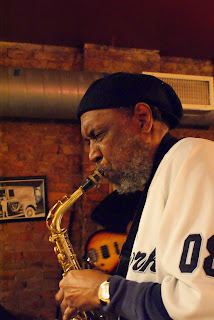 His principal mediums: acrylic, felt-tip marker, watercolor and collage.
Jack has traveled the world sharing his music and art across the US, Canada, France, Germany, Italy, Finland, Austria, Luxembourg and Slovenia. 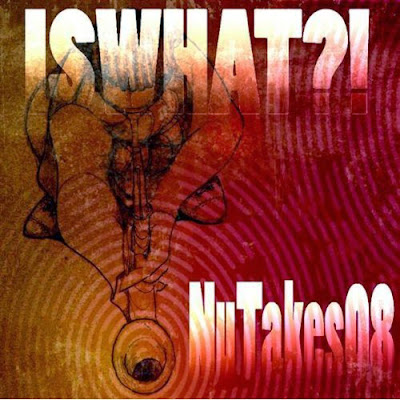 The majority of Jack's work for this show will be in the mediums of watercolor and acrylic. 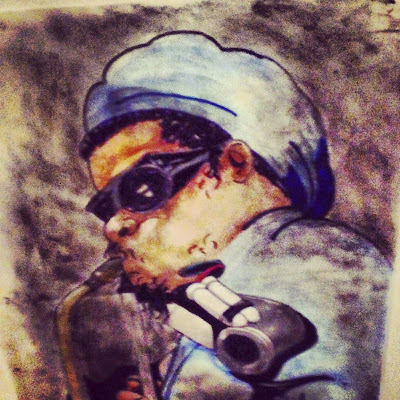